In the post a matter of state I've introduced you to the three basic building blocks that I use to build software systems:

Using these three base primitives together with Event Modeling I can analyse and model business processes.

From the resulting models it then becomes possible to derive processing patterns by looking at the transitions between commands, events and state.

In total there are 9 such transitions between commands, events and state.

For each of these transitions I have a go to design pattern and a default implementation of these patterns.

Note: this table reads from left to right: Command in -> events out = Aggregate root

I didn't invent any of these patterns, instead I have selected them from various industry books and online literature.

In the upcoming sections I'll discuss them in this order and try to refer to their origins.

They all fit nicely together though, as the output of one fits the input of others.

These patterns stem from the collective work of Greg Young, Eric Evans, Martin Fowler and have been built upon by many others in the CQRS/DDD/ES community.

These are also the three patterns that are highly recommended by the Event Modeling methodology.

Task processing interprets state as 'todo lists' and decide which command should be issued to progress entities in their lifecycle.

In most systems, especially in the early stages, a lot of the task processing is performed by the users.

The system presents them state, in a user interface, e.g. a list of orders to process, and they will take a decission on what commands to issue in order to progress the state of these entities further down their lifecycle, e.g. grant a discount.

The system offers them the correct widgets to issue those commands, typically via a Task Oriented User Interface.

The Task oriented UI concept is derived from Microsoft Inductive User Interface Guidelines, and further refined by the CQRS/DDD/ES community.

When the rules to issue certain commands are crystal clear, the system can automate task processing. E.g. all orders from gold customers get a 10% discount.

From a technical perspective this pattern can be implemented using a background worker which scans the state (directly from a database, a task queue or pulled from an api), interprets it, and invokes a specific command when the rules are met.

When the command is issued the worker typically marks the task as done so that it doesn't process the task twice.

People often want feedback of success or failure of the issued commands, to achieve this you can combine the task processing pattern with Aggregate Root plus Projection or Downstream Activity.

An aggregate root, as defined in the book Domain Driven Design (DDD) by Eric Evans, guarantees the consistency of changes made to entities and value objects encapsulated within the aggregate.

An aggregate root can guarantee this consistency by forbidding external objects from holding references to its members and thus prevents manipulating them directly.

Instead external objects must issue commands to the aggregate root, which will then perform the changes on it's members on behalf of the issuer while maintaining consistency and validating all invariants.

When the aggregate root is done making the changes, it will publish events to anyone else interested in the outcome.

E.g. a SalesOrder aggregate will validate that a booking contains eligible product items for the sale and raise a SalesOrderBooked event if the booking is allowed. 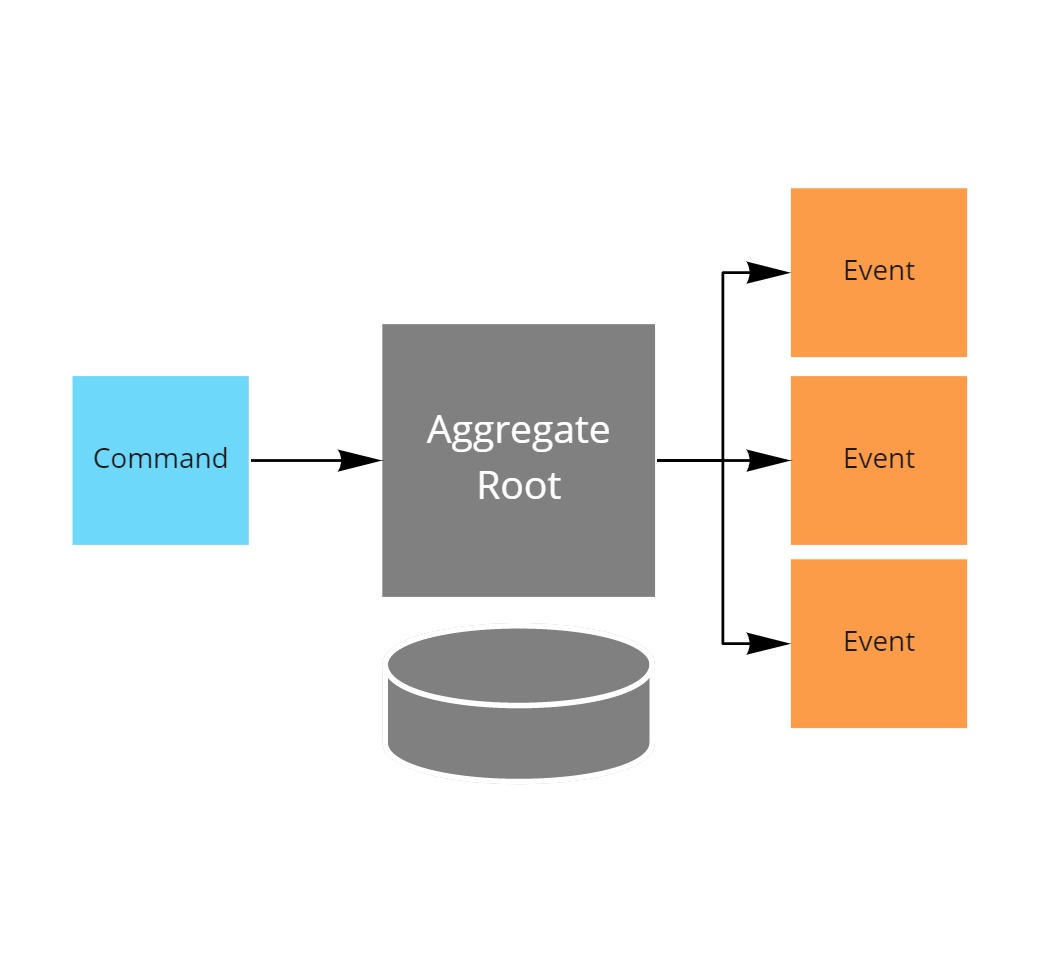 Event sourcing means that the internal state of the aggregate root is reconstructed from the events it previously emitted.

In practice all my aggregate root implementations will be event sourced, yet this isn't mandatory.

Most humans are not able to plug themselves into a stream of events and make sense of it.

Instead they prefer to be shown some sort of a summary that is adequate for the job at hand.

Turning event streams into such a summary is the responsibility of a projection. 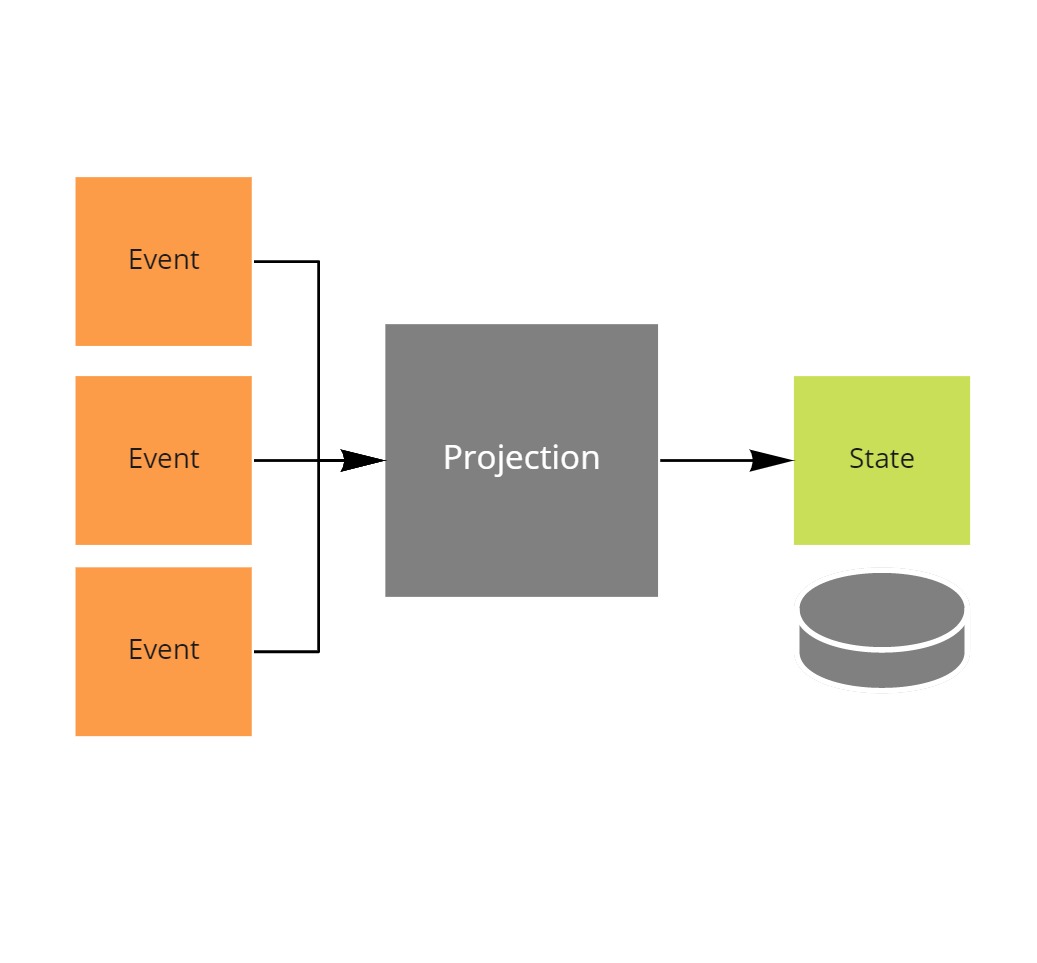 The output of this projection can then be stored in a database and shown on a screen.

Projections are often used by the user as confirmation that the command they invoked previously has succeeded or failed. E.g. by showing the granted discount on the original list of orders the users was processing.

When a projection is used as confirmation it is recommended to have session level consistency with the processed command, otherwise people get confused and will invoke the command multiple times.

For other projections, eventual consistency models are fine.

Not all systems match nicely to a business process though, some have other goals such as monitoring and control, or have integration requirements with systems that do not follow the command > event > state paradigm.

For many of these needs the Event-driven architecture (EDA) patterns are a good fit.

An event generator detects changes in state and reports those changes as events that can be understood by the rest of the system. 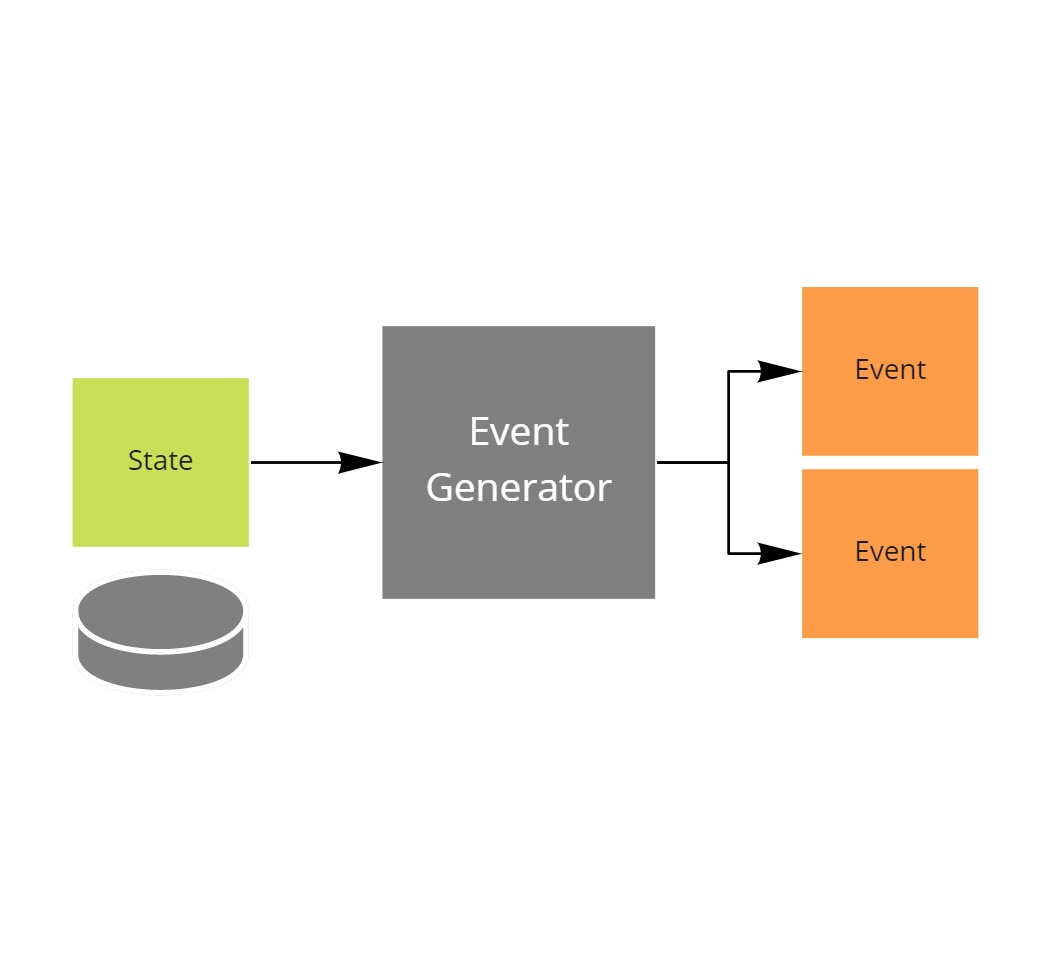 Some examples of event generators could be:

They all have the same traits in common: they derive events from changes in state.

This pattern is very natural in an IoT environment, but it can also be used to retrofit state from an other system to an event oriented model.

Event processing refers to the practice of interpreting actual events and then performing operations in response to patterns detected. 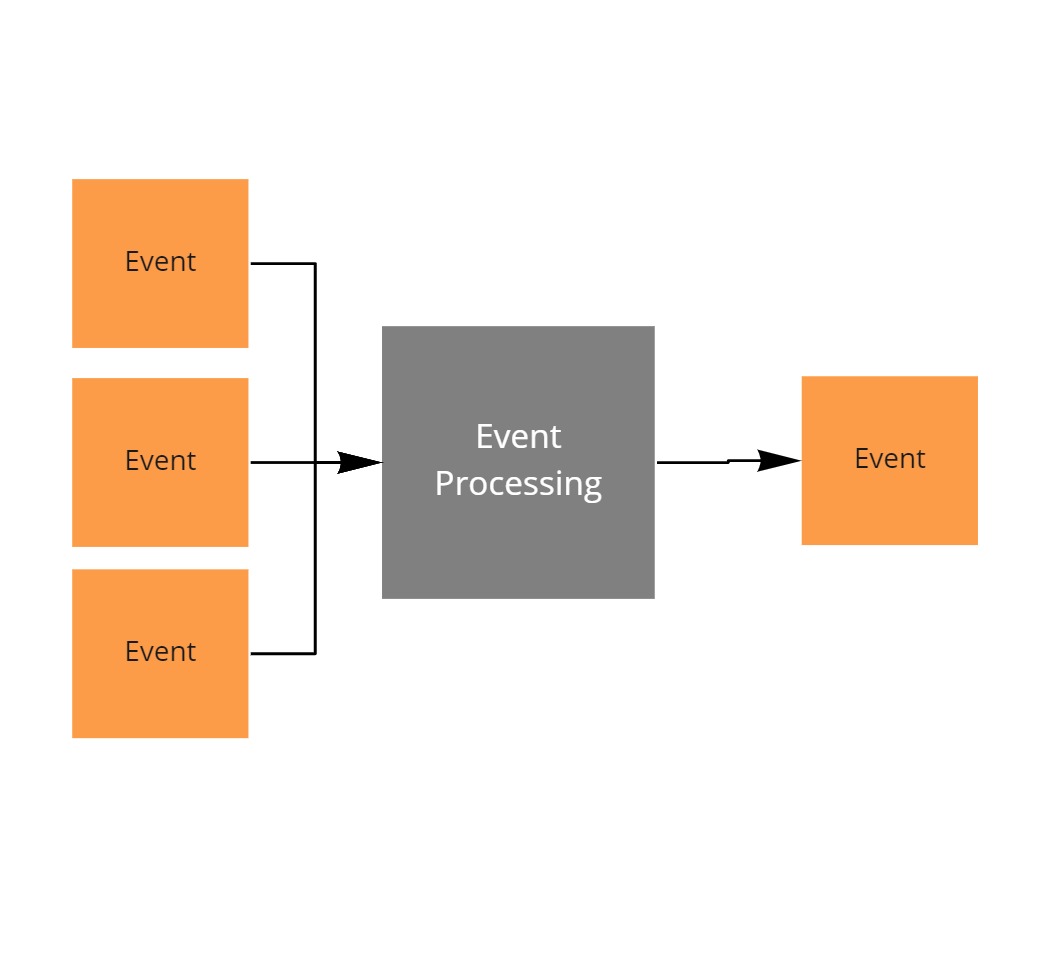 There are different event processing styles:

Operations that can be performed may include:

As a result of executing these operations, an event stream processor typically emits new events to let any interestee know of the outcome of the operation. 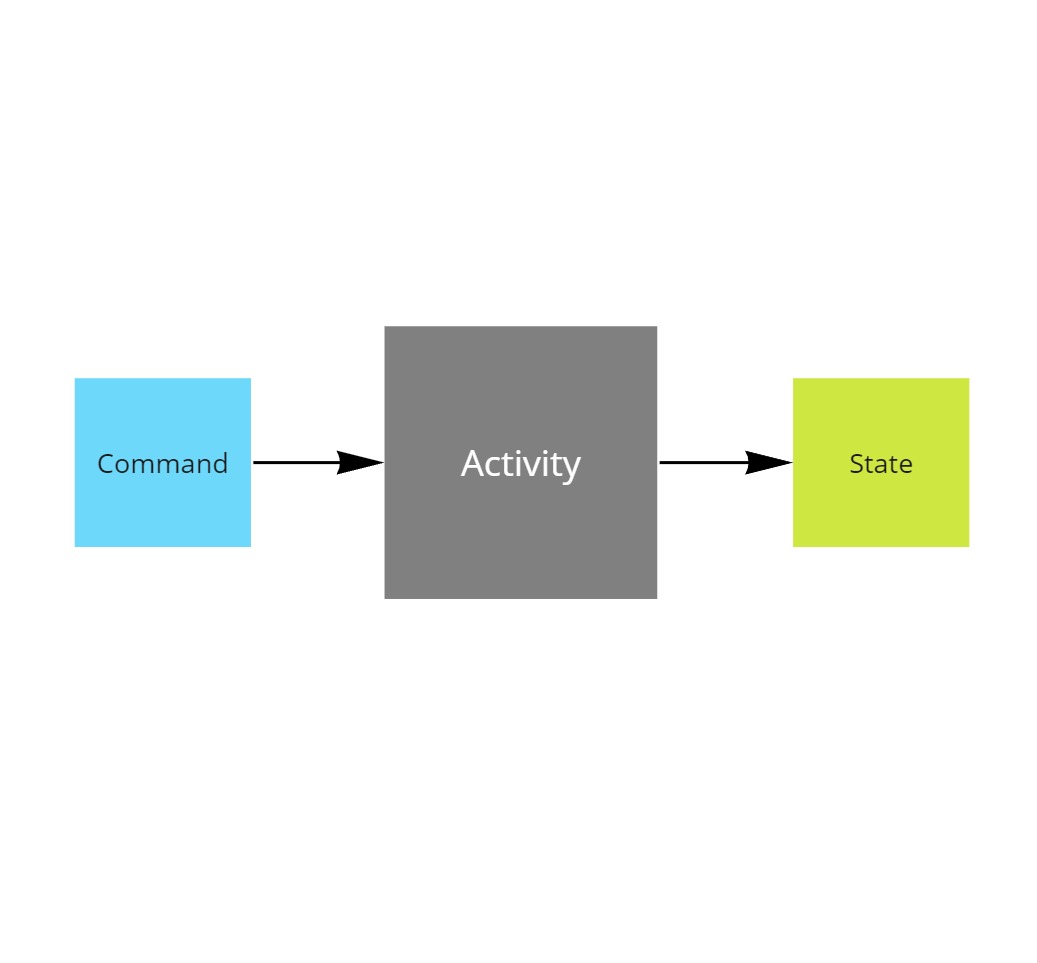 Downstream activities often have some impact, either direct or indirect, on the physical world.

When various commands need to be executed inside the system, or in other systems, in response to a single command or event, then the Enterprise Integration Patterns (EIP) offer multiple options.

The author of these patterns, Gregor Hophe, combined several of them together into what he calls Conversational Patterns.

Of these Conversational patterns the Choreography and the Orchestration pattern are most interesting to transition from respectively event or command, to other commands.

In practice these patterns offer two very different ways to fully automate a business process or to set up integration between disparate systems.

In a choreography, each partner in the conversation tracks the communication with its partners itself.

It does so by listening to events, emitted by those partners, and respond to them by taking action locally (interpreting events as if they were commands) and in turn emitting events as well. 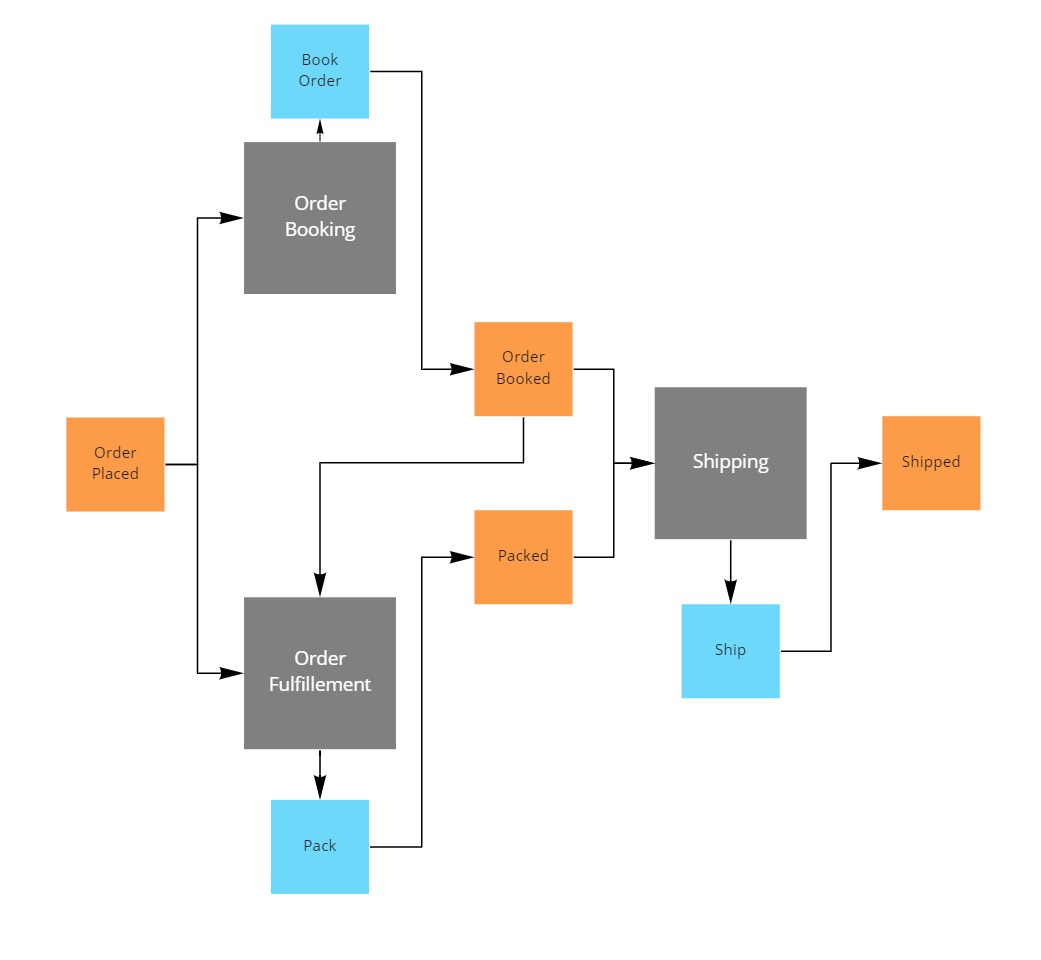 Note that events are facts, they have already happened, they are not as indeterministic as commands are.

So in a choreography there is no failure path to design, all failures can be handled locally by each of the partners.

Therefore I prefer this pattern over orchestrations, which do suffer from the indeterministic oucome of commands.

The most notable downside of this pattern is that it is invisible and requires stellar documentation.

In an orchestration there is a central component that represents the process itself.

This component responds to a command by issuing more commands to other components in the system, while it keeps track of the state of the conversation between these partner components.

The orchestration needs to listen to responses, or events, emitted by the partner components in order to keep track of the state of the conversation.

When a partner component reports that it successfully executed a command, the orchestration will issue follow up commands.

When the partner component reports a failure, the orchestration needs to send subsequent commands to it's partners to correct, or compensate for, the side effects of any prior executed command.

Which in turn can fail as well, resulting in more complex compensation logic.

And what about saga's?

Depending on who you talk to, the word Saga might mean an orchestration or a choreography.

This word has caused quite a stir in the community in the past, so I try to avoid it ever since.

And finally we end up at the last processing pattern, a transformation from state to state.

In the services world this pattern has been documented by Thomas Erl in his SOA patterns book series.

This pattern probably exists since the first computers have been around though and often translates in: 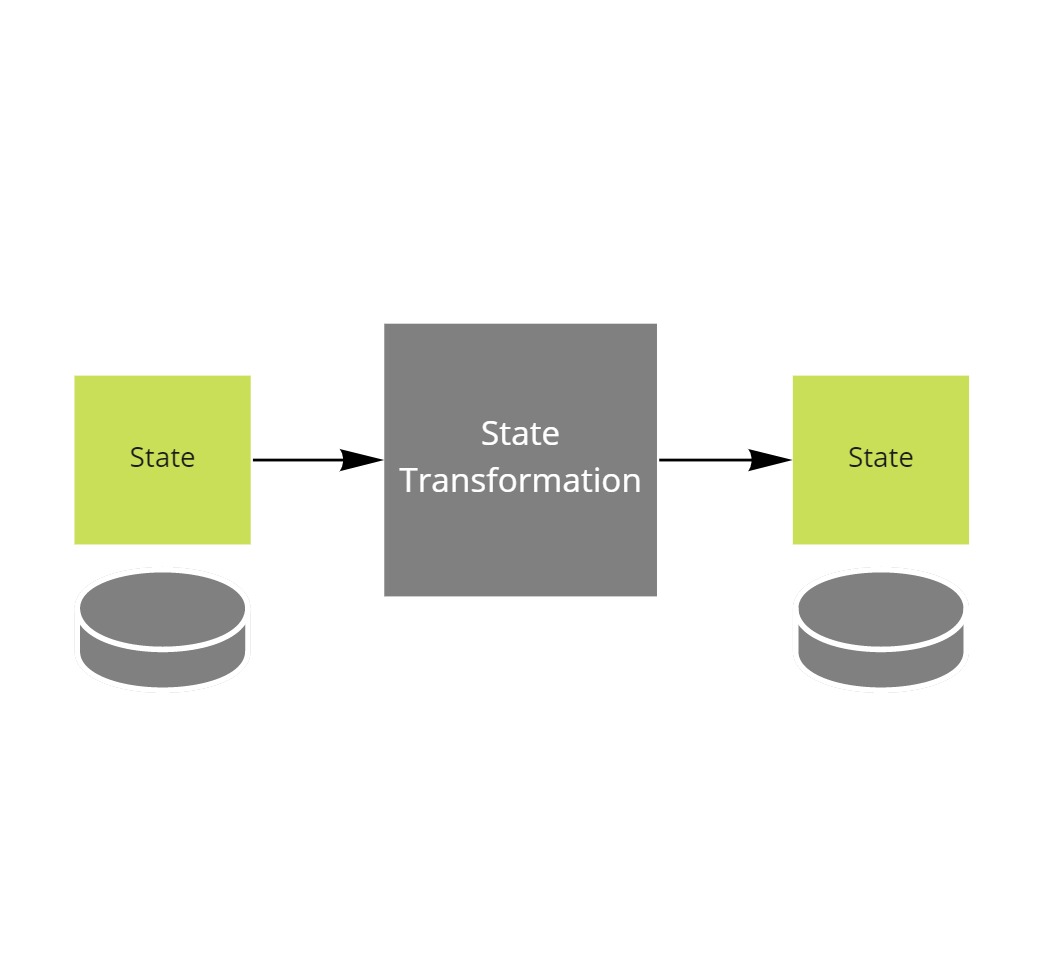 As I already dedicated an entire article on the downsides of this pattern, in a matter of state, it's needless to say I'm not a big fan of it.

By combining the above 9 processing patterns, you can build any kind of system. From business process support and automations to IoT systems, from online API's to offline web apps.

None of these patterns mandate distribution though, you can combine them inside a browser based offline web app without any distribution at all. But they all support distribution, so that when said web app needs to integrate with other parts of the system, it can, using the same patterns combined in a different way.

I have roughly ordered them in order of personal preference, but each of them has its time and place in the design most systems.

In future posts I will definitly come back to them and show when and where I use each of these patterns in the clubmanagement system with some examples of how I've implemented them.

So, stay tuned for next time. And if you have any further questions or remarks, do not hesitate to reach out to me.